A Book You Need to Read! Bean're Motorcycle Nomad 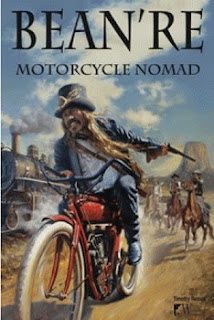 Who is Bean're?  You honestly don't know?  Well he's the Motorcycle Nomad!  He's the Mayor of Fun!  And he's got an amazing book that tells his story of how he's been living the nomad life on a motorcycle.  Bean're is definitely full of character and someone that has brought that character to the motorcycle community for many years.

Even if you know Bean're you will enjoy this book.  And if you don't know Bean're, after reading this book, you will want to go to the next rally and meet him.  This book is an easy read and a page turner.  I've read so much about Bean're's current adventures that it was very interesting to learn about Bean're as a kid and Bean're during his Marine days.  He's also been sober since 1988 and Bean're proves each day of his life that you can have a blast in life without drinking or drugging!  Congrats on that Bean're!

One of the best chapters of the book is Chapter Seven called Friends.  Bean're has so many friends that he's made throughout his life and it was great getting their perspective of Bean're and how he's made a mark in their lives.  Betsy Huelskamp wrote, " In much the same way that there was "Something About Mary," there is most definitely SOMETHING about Bean're.  Exactly what the something is has yet to be defined, but it is a quality that sets him apart from the rest.  Bean're is not like the others.  He recognizes this about himself to such an extent, that if he had to fit in, and be like the others, I think it would actually cause him mental duress!"  Cody Marks wrote, " Bean're is envied from cubicles to service centers all over the world."  Woody, the owner of the Infamous Buffalo Chip probably said it best, " I suspect in every one's life there are one or two times we just have to ask ourselves, "What the heck is that?" or just "Who was that masked man?"  Or, in this case it was a less earth-shattering, "Who is that guy wearing the top hat and that funny suit?" 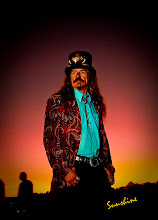 Intrigued yet?  I know you are!

Bean're has had so many adventures that I'm sure it was difficult picking out what ones he wanted to share in this book.  There is a story about his trip to Alaska and what he had to do to get over the border of Canada to even make it to Alaska.  Bean're hasn't just ridden in North America, this guy has gone global.  He's ridden in Europe, Morocco, and Australia.  Because I've never been to any of those countries it was so enjoyable reading about his adventures.  So many times in our lives we plan everything, not Bean're.  He makes it to the destination and travels without a schedule.  He just takes it all in and experiences the journey as it comes his way.  I think Bean're explains it best, "The travels are the answer.  The quest is the answer.  Just out there searching - it's not what I'm going to find, it's the fact that I keep searching.  That is where I'm getting my happiness, to be able to meet the people that I'm meeting...Being able to let life guide me.  Rather than saying okay, I'm gong to go here now, I say ok, I'm going to get on my bike and go in a certain direction.  But I might not end up that way, I might end up riding 180 degrees in the opposite direction.  That is the beauty of it, life calls me that way."

Have I convinced you to buy this book yet?  If you love the motorcycle life and you enjoy reading and learning about the people in it, you have to buy this book.  You will enjoy and sometimes laugh out loud, reading the interesting stories about Bean're and his life.  And there are so many amazing photos of the places he's been and the people he has met.  I do have to say...I was a tiny bit disappointed that the photo of Bean're and me didn't make the pages of his book but I'll let it slide!  Ha ha! 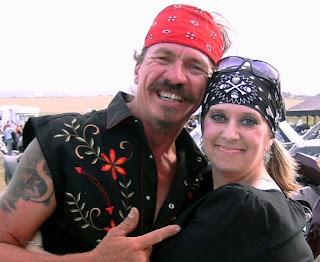 You can get your signed copy of Bean're's book, "Bean're Motorcycle Nomad" written by Timothy Remus

though PayPal by sending the payment to worldoridr@aol.com .  The price of each book is 20 dollars and is shipped free (in the lower 48 States).  In Canada the price is $24 and  in Europe the price is $30.

If you are planning a trip to the Sturgis Rally in 2013 you might want to stay at The Legendary Buffalo Chip Campground because rumour has it that Bean're will be the Mayor of Fun at the Chip again this year!
..

Hey Stef! I loved the write up and the book is a great insight to a true rider's life. Always look forward to your interviews and posts.

I am intrigued. I will definitely have to read the book.

Thanks for the review.

I'm loving your blog ~ so much so I added you to my blog roll. You're the kind of fun, female rider that I like to read. :)

Nomad life. . . aaaahhhh, sounds like heaven! My hubs and I are leaving in April for a 6-month ride around the U.S. I'm beyond excited, as well as a little nervous. I still have so much to learn.
I'll have to pick up Bean're's book. I'm wondering if it's an ebook too.