Home is Where Your Harley Is...

Sadie spent a couple nights away from home.  J & S Custom Cycle tuned her up and put on the new hand grips that I bought from Kuryakyn.  Saturday morning I road two up with Dan to go and pick her up from the shop.  That was weird!!!  I don't think I've ridden on the back of his bike for a few years now.  It was enjoyable enough to be riding behind my man but after riding my own now it sure felt strange.  I think if I ever did decide to ride two up with him again I'd make him get a Geezer Glide.  DAMN, that passenger seat on the Street Glide is uncomfortable.  I was some kind of trooper riding on the back of that for all the years that I did.

We got up to J & S and they pulled Sadie out.  I was so happy to see her.  After seeing my new grips,  Dan ordered himself a set for ZP and then we were off on our morning ride.  Holy Mother of Christmas, I don't know what they did to Sadie but she moves now.  I'm going to dig the grips but they are going to take some getting used to.  I do think I'm really going to like the Throttle Boss for that ride to Sturgis. 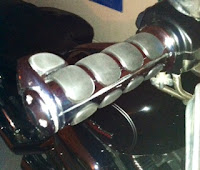 After making our way out of town we found this road outside of Waukee that goes to Dallas Center that was so awesome!!  I wish all the roads around Iowa were that wonderful.  It was like butta!  The highway from Dallas Center to Grimes is horrid!  I hit a bump and was literally off my seat practically standing up.  I can't believe they didn't even have a "Bump" warning sign pointing it out.  Big hazard!  After our trip over the mile long bridge outside of Polk City I decided maybe we should head for home.  The sky was getting dark which meant we were in for another round of rain.  I swear, someone must have really peeved off Mother Nature because we've had more rain here then we did during the floods of 2008.  Insane!

When I looked in the garage tonight to make sure the door was down I smiled because there was Sadie, back home in her space waiting for me to ride her again tomorrow!  All is perfect in the world again!