My thoughts and prayers are with everyone involved in this horrible tragedy. And this is probably very cold to say but I hope that the gunman is enjoying his after life in hell!
Posted by IHG at 6:21 PM No comments:

Blessing of the Bikes

I've always heard about it but have never had a chance to go, so I was so happy that I finally was able to make it to the Blessing of the Bikes Saturday! I'd say there were about 200+ bikes at Zook's HD. I love being around all my fellow bikers. It's such a great feeling to be in the company of like minded people. If you've never been to the Blessing of the Bikes before you have to go. It made me feel so good asking God to watch over us while we travel the open roads this summer and fall. We need all the prayers we can get everytime we leave our house and go on a journey. Ride hard but Ride Safe this summer and fall. And first and foremost, having a wonderful time doing it!
Posted by IHG at 6:14 PM No comments:

Ok...so the guy made a mistake. Hasn't everyone?? I guess the media must have got bored with the death of Anna Nicole and decided to pick on him instead. Yes...what he said was something he shouldn't have but are we even sure that he knew what a Ho was? Or was it more about the Nappy comment? My father in law had no clue and he's around the same age as Imus. I have decided to be done with all media, with the exception of my beloved internet.(giggles) I think I'm going to watch the local news and that's about it. I'm tired of all the stuff that the media tries to influence us with. I think it has poisoned our society.

The thing I don't understand is that both of the companies that fired him...did they even take into consideration the good he did for others in our country. I mean seriously people...he helped kids with cancer and our soldiers coming home from the war. I sure hope even with what has happened to him he continues the good he has done. I have a feeling he will.
Posted by IHG at 10:45 PM No comments:

We finally got the Zippy Pickle out today and took her for a long spin! I'm so glad I wasn't Ms. Tough Chick today...I was so happy I decided to wear my leathers...it was still a little chilly with the wind. It sure felt good though. I love riding...it's just such a spiritual experience for me. Makes me feel one with the world. Lots of people knock Iowa but there are some awesome country roads out there with great twisties. And now that Spring is finally going to happen it's going to begin to look so beautiful once again!

Happy Spring and Happy Riding to all Motorcycle Enthusiasts out there!
Posted by IHG at 4:41 PM No comments:

I knew I was asking for trouble... 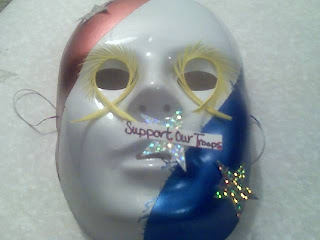 I belong to an artist challenge group even though I'm really not a real artist. Our last project was to create a mask. Well if you know me you know that I'm very All American and I support our military! My mask was red, white, and blue and I had a star coming out of the mouth of the mask that said Support Our Troops. I shared my mask with the group and gave my little speech of why I created it. After I was finished I was attacked about my beliefs about the war and our country. I guess I should have expected it but it blows my mind how many people just don't get it. And it really blows my mind how artists say they are so open minded but yet if you do not have the same views that they do you are suddenly ignored. After my experience last night I'm thinking of discontinuing my attendance of these events. I'm never one to judge someones opinion on something. I'm open minded to their beliefs and thoughts. I guess I expected more from these people. They all tend to forget how lucky they have it for being able to do as they wish each and every day of their lives. And who knows what this war is really about...maybe it's about oil, maybe it's about stopping terror, maybe it's just GB being a bully...I don't know...I just know that without our military watching over our country and other countries we would not be able to live the way we TAKE FOR GRANTED each and every day of our lives.
Posted by IHG at 7:11 PM 2 comments: