Growing up I was always a bit of a hell raising girl. I caused my Mom and Dad many sleepless nights during my teenage years. I've remained a bit of a Wild Child even at 40. I've always loved Joan Jett because she was such a Wild Child too and still is at 50. I love the song Bad Reputation so I thought I'd add it to my blog today for everyone to enjoy! Being a biker chick you always seem to raise a few eyebrows because you are just a little bit different then all the rest of the women out there. And you know what?? I don't give a damn about my reputation!

Just Kill Me - A Tribute Tattoo

About a month ago I got a friend request on Myspace from “Just Kill Me”. I was thinking it would end up being another rock band that was out spreading their music around Myspace. Well to my surprise it was a fellow biker named Harley Mike from Colorado. After adding Mike to my friends list I checked out his page and found one of the most amazing tattoos that I’d ever seen. I immediately hit send message and asked Harley Mike if he’d like to share the story about his incredible tattoo. Mike agreed and now I’m sharing it with all of you.

Harley Mike Hight has been around motorcycles most of this life. Raised around a 1%er Club, he would help them work on their bikes. As he grew older he was asked to work in a small 1%er Club shop in the Ventura/Sherman Oaks area of California.

Mike’s first bike was a ’57 straight leg frame with a shovelhead engine. He currently rides a killer looking 1991 Heritage and is rebuilding a 1948 with a PanShovel. 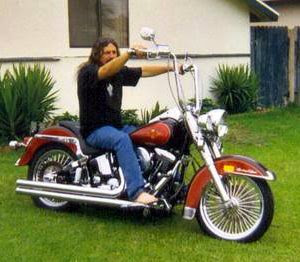 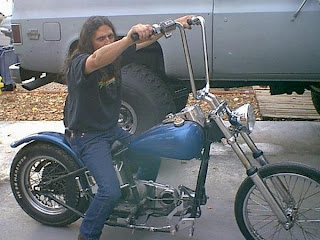 Working in the High Rise Restoration business, Mike was the boss to a guy named Vince Marskell. Vince became one of Mike’s best friends.

Best friend (or close friend): a person(s) with whom someone shares extremely strong interpersonal ties with as a friend.

Vince was the kind of person that thought of his friends before he thought of himself. If asked he would give his last dollar to a friend. Once he even offered to sell his motorcycle and buy 2 cheaper motorcycles just so he and Mike could ride.

Mike and Vince partied together often but eventually Mike decided to slow his life down. Vince kept on and would end up in wild situations. Once while Mike, his family, and Vince were camping Vince fell asleep totally intoxicated with his feet in a campfire and caught himself on fire. Another time Vince and Mike were fishing. Mike walked away for a few minutes and heard a splash. Vince had fallen into the aqueduct and Mike had to save him. Vince’s life spiraled out of control and one day Mike invited him to move in with he and his family. They wanted to see if they could get Vince away from things and turn his life around. Things with Vince did not get better. Vince would be out riding and he would forget to put his feet down at a stop light and he and the bike would fall over. He would run red lights because he thought he was invisible and would collide with other vehicles. It finally got to the point where Mike had to ask Vince to leave even though he really did not want to. Mike had his family to think about and even though it was a difficult decision it had to be done.

Vince moved back to California and a short time later passed away from a Brain Aneurysm. Mike found out through a friend of Vince’s passing. He couldn't find any information on where the funeral would be or the dates until his grandmother finally found Vince’s obituary. Mike went right away to say good bye to his friend.

Vince was like a Brother to Harley Mike. They shared in a lot of good times and tough times. Harley Mike wanted to remember both. He decided to pay tribute to his friend with a tattoo.

Tribute A: Something given or contributed voluntarily as due or deserved; especially: a gift or service showing respect, gratitude, or affection. B: something (as material evidence or a formal attestation) that indicates the worth, virtue, or effectiveness of the one in question (the design is a tribute to his friendship).

This tribute had to be special. This tattoo had to be special as this would be Mike’s first tattoo. After doing research, he traveled to Outer Limits in Long Beach, CA. Mike had heard and read good things about Outer Limits and in order to get a first hand viewpoint, decided to spend time getting to know the tattoo artists there. He felt most comfortable with Jaydee. Jaydee and Harley Mike sat down and Mike laid out his vision of the tribute tattoo. Vince had a rather off-handed signature comment that was one of his favorite ways to wrap up a conversation; Vince would always say “Just Kill Me”. Those words were so much a part of Vince that they had become a part of Harley Mike, those 3 words had to be incorporated in the tattoo. Mike had brought pictures that his son had taken of him on his Harley holding a Jack Daniels bottle to Outer Limits. The photos portrayed Whiskey being poured out of the bottle. His vision was to make it look like he was pouring Vince his last drink. Harley Mike also drew inspiration from David Mann’s “Ghost Rider” painting and wanted himself to be the one that was portrayed dead. Tattooist Jaydee spent seven weeks sketching out the piece and on September 22, 2006 Jaydee and Harley Mike began what turned into 10 weeks of sittings to create the Vince “Just Kill Me” Tribute tattoo. 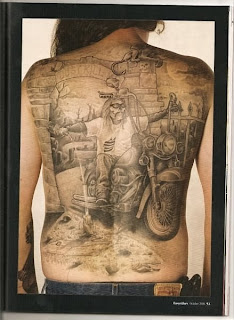 The tribute tattoo is incredible. The tattoo shows Mike riding through the cemetery gates and passing over Vince’s grave. Vince’s hand is coming out from under his headstone holding a shot glass and Harley Mike is pouring him his last drink. If you look very close you can see that Vince’s hand still has skin and the skeleton riding the Harley is Mike.

Mike’s tattoo had become the talk of the town and almost legendary amongst the tattoo community. Mike was getting into the tattoo scene and it was on the Queen Mary during a tattoo show called the Ink and Iron Convention getting a tattoo of a pinup girl that he turned into a Vampire that he met Billy Tinney, a freelance photographer for Easyriders magazine. Billy asked Harley Mike if he would be interested in doing a private photo shoot of his tattoo for the October 2008 issue of Easyriders. Mike agreed and his tattoo appeared in the magazine. 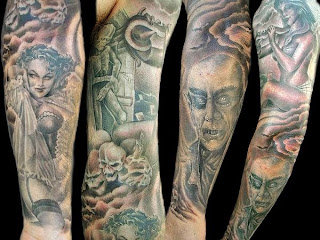 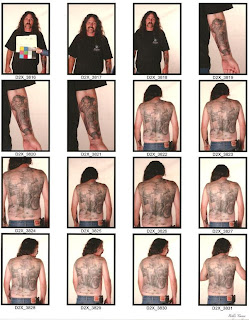 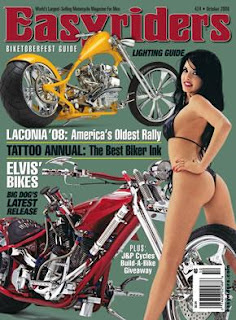 Harley Mike has carried the tribute tattoo theme even further by paying respect to Stevie Ray Vaughan. Mike loves music but the blues is his all time favorite. Mike and Stevie had similar lives where they almost died from drug abuse. One tattoo is a Crown Royal bottle pouring out a ribbon that says Life By the Drop. Vince and Mike used to drink and do a lot of drugs…that song had a lot of influence on Mike and helped him clean up. Mike looked at his life and his two children and decided what was most important. 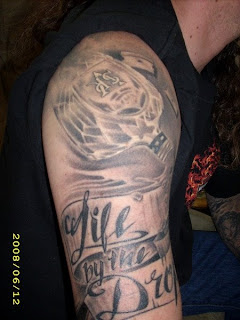 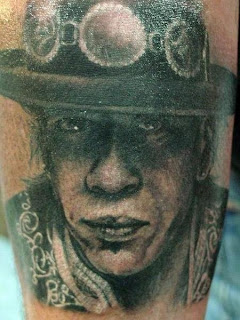 The one thing that Harley Mike would really like to do is be able to find Vince’s family so that he can show them the Tribute tattoo that he did in memory of his friend.

Thank you Harley Mike for sharing your “Just Kill Me” tribute tattoo story with me and letting me share it with the people that follow my Blog. To check out Harley Mike's Myspace page go to http://www.myspace.com/harley_mike .
Posted by IHG at 4:42 PM 16 comments: 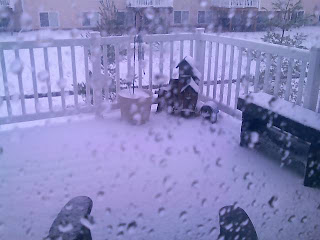 I was checking out the Cycle Source site today and found this video on the Limpnickie Lot that happened during Daytona Bike Week 2009. It seems that a bunch of us dig Bobbers and that's all that is in this video so ENJOY!!!!