A new blogger has rolled onto the motorcycle blogging scene with his blog Bikes and Buddies. His posts are very entertaining and great reads. You'll want to check out his blog and check out the interview below.

When did you first discover motorcycles?
1988. I grew up in urban Philadelphia and was there until my dad was offered a work transfer to a rural area of Pennsylvania. I fought like a cornered honey badger, but when it became clear I was going to loose, I tried to sweeten the pot by getting something I had always wanted but had no use for in a city: a motocross bike. I told him I would go without issue if he bought me one, and in what was likely an attempt to shut me up, he agreed.

What was your first motorcycle?
Yamaha TT350 by means of the answer above.

What do you currently ride?
2001 Harley night train in the terrific color of poop brown. I dig it.
A special construction job I built in 2006 using mostly Exile parts.
And I’m rebuilding a 1946 knucklehead to look stock, but be bigger for my size.

How many motorcycles have you owned and what were they?
A lot and frankly I’m too lazy to list them.

How do you feel when you are riding?
My feelings are always the same. When I first go to get on a bike I am nervous. I’m not sure why and I often have to pee first because of it, kind of like before giving a public speech. But once I’m on it and moving I am happy beyond measure and all other things in life – stress, bills, worries, etc. – vaporize. This has always made for a small energy barrier for riding, but I always manage to get over it.

Is there a motto that you live by?
The Golden Rule. 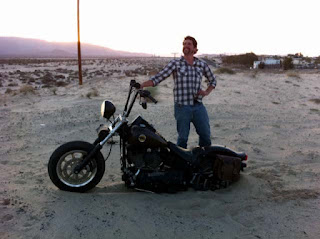 Do you feel you are treated differently because you choose to ride a motorcycle?
No. But I am treated differently because I’m a gregarious ogre. One of the best pieces of advice my dad gave me growing up was to walk into a place like you belong there and you will. He used to walk into gyms with this demeanor when he traveled for work and never paid a dime (though being an ex-pro football player that was huge likely helped). I took that to heart and carry myself with confidence, even though deep down I feel awkward and question most everything I do ad nauseam.


Why do you ride a Harley?
I ride Harley or cruiser style bikes and I’m not entirely sure why. I just do. Part of it may be that most of my tools are standard and I’m too cheap and lazy to go buy a whole set of metric tools. But I guess the larger reason is my love of old Harleys: knuckle-, pan- and flatheads.

Do you have any mentors or heroes? If so, what have they taught you and why do they fall in this category in your life?
While a lot of folks have influenced me in one way or another, I don’t have any standout mentors or heroes. Influences for writing are Jean Shepherd (A Christmas Story), David Sedaris and Cormac McCarthy; for bikes it is largely Russell Mitchell of Exile.

Do you have a favorite rally?
Sturgis. All big rallies are really just carnival shows in disguise, but this one just tickles my fancy.

Do you have a favorite place to ride and why?
The 101 of California. I can encapsulate it with an excerpt from one my stories entitled “Motorcycle Conflagration.”

Exiting the Bay Area revealed route 101, a beautiful thoroughfare of alternating farm land and rolling hills that transforms from elephantine redwoods in the north to wind-sculpted Blue Oaks and pungent-smelling eucalyptus in the south. There are even the occasional palm and cork tree. The landscape and myriad of trees, many of which were introduced from Australia, Europe and Africa, created a spectacular backdrop for a road trip.

What are your thoughts on women riding their own motorcycles?
Sexy. My wife rides and it is flat out hot. 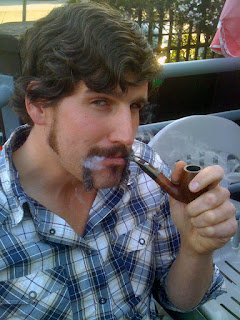 Is there really a motorcycle “wave” or is it just something we do to freak non-riders out?
Folks love that low wave below the bars. Harley Bagger guys really go at it. To amuse myself, I often give a fruity wave when I pass other bikers. And the tougher the other rider is trying to look, the more silly I make it, eventually using the Queen Mother’s hand turning thing. I know it’s a home run when the other rider’s expression goes from “look at me, I’m tough” to “What the hell?”

What do you think of helmet laws?
There should not be one. As adults, we should be allowed to make our own choice. With that said, anyone who rides 70 mph without one is nuts. I love mine and seldom go without it.

Do loud pipes really save lives?
I would guess yes, though there has never been a statistical study (that I know of) to prove one way or the other. If nothing else, they are great for annoying folks in minivans.

You have a blog called Bikes and Buddies ? How did it get it's name? Why did you decide to start blogging?
I love writing about motorcycles, friends, family and the general happenings of life. People fascinate me and focusing on that within the context of bikes just fits. The name came about because my friend Grant Reynolds once told me alliterations (repeating first letters) stick with people. Bikes and Buddies fits that bill and seemed to roll off the tongue.
I started blogging in support of a book I wrote entitled “Motorcycles and a Baby: Stories of a Gearhead’s Roadtrip to Fatherhood.” It turns out publishing a book is much harder than most folks think and I didn’t realize this until I was nearly done and began trying to sell it to agents. Publishing houses (and the agent who pitch it to them) demand what is called “platform.” It’s a word that describes how well people know you and your work through a number of avenues. While I have written for motorcycle magazine for some time, they see the blog as the number one metric for determining a writer’s readership because people are there for you and you alone. It is, in their eyes, a “built-in audience.” So I started the blog to help make my book a reality, and not one that is through self-publishing; that just gives the author a stack of books for presents to friends and family. With that said, the blog is also a great place to print stories where I have complete creative control, something that is lost when a publishing house becomes involved.

You build motorcycles, tell us about that.
Sometimes I love it, like when something great comes from a day’s work. Sometimes I hate it beyond measure, like when something keeps breaking. Then I ponder buying a brand new bike and touching nothing on it. The problem is, I tinker. I could never buy a bike and just leave it alone. So, I would say it is a love-hate relationship. 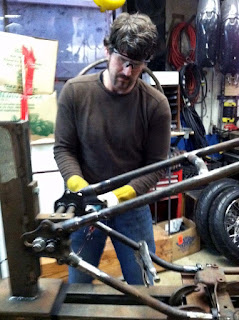 What is the wildest thing that has happened to you on the road?
Now why would I go and give that away. Keep reading my blog and find out.

Are there any lessons that you’ve learned on the road that stand out the most?
Speed is the number one thing that will end your day bad. With age I have slowed down and grown to realize why 18-year-old boys should never ride motorcycles.

Do you like riding with a group or are you more of a lone rider?
Both. Each has its high points.

What has your greatest accomplishment been?
Marrying a woman entirely out of my league.

Do you feel like there are divisions in the motorcycle community because of the type or brand of motorcycle you ride?
Of course. There are even divisions within brand, such as Harleys. I wrote a short piece in Chop Cult on this entitled “Sturgis vs. The Slab: A Sociopolitical Inquiry.”
The Slab City Riot is a small rally in Slab City, an abandoned town in southern California made famous in the movie “Into the Wild.” A bunch of hipsters go there each year on old bikes. They love to poke fun at the bagger guys that go to the big rallies saying they are clones. But the hipsters are no different. They ride the same bikes as all their buddies, act like their buddies and dress like their buddies. It just so happens that their spectrum of choices is different from those that go to big rallies.

In the end, what kind of bike a person rides or what clothes they wear does not matter. What does is if they are good people. I’ll take a good person on a pink scooter any day over a douche bag on the coolest of bikes.

If you knew this was your last day on earth, what would you do?
Sit on my roof with my wife Elizabeth, son Gage and a case of beer.

When you are not riding what do you enjoy doing?
Writing, laying spread eagle on the sofa with some horribly bad TV (I have a real passion for SciFi and horror) and being with my son Gage. The last one has taken a large bite out of riding time, but that is fine by me. 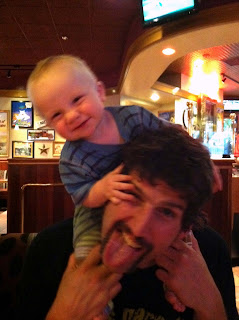 Do you have a favorite swear word?
“Crap.” It is the perfect swearword: not too offensive, with just a touch of humor built in.

What are you currently reading?
“A Walk Across America” by Peter Jenkins. I found it in a thrift store and was taken when it described the story as a man’s journey across the states with his dog to find himself and his country. It is from the ‘70s, but things like this transcend time.

What’s in your CD player?
Tool, Roy Orbison (partly because it annoys my wife to high hell), The Who, Pearl Jam, The Dixie Chick (yes, I know I’m gay), Motorhead, Metallica (everything with Cliff Burton; i.e. before the Black Album), Beatles, Pink Floyd, Public Enemy (best rap ever), Neil Young, Queen, System of a Down.

What is my darkest secret kept from the Biker world?
I do a Jillian Michaels ab workout three times a week. My lower back is trashed from years of wrestling in high school and college as well as years of riding on idiotic bikes with rigid frames. After bitching about the pain to no end, a friend of my wife told me she too had a horrible lower back, but it went away when she did this magical workout. I tried it and the pain left: it was the best thing ever. And now I have a killer set of abs hidden beneath by burrito-fueled belly.
Posted by IHG at 6:45 AM 4 comments:

You Might Be Shocked At Who Rides A Harley

A lot of people are shocked when they find out I ride a Harley. I just laugh and say YES I DO and It's amazing!