I just watched a documentary called Alive Day Memories. It's a must see. James Gandolfini interviews 10 Soldiers that became disabled because of the Iraq war. It made me love our Troops all the more. We need to stand by them and support them forever because they have given such a huge sacrifice for us and our country. The show will rip your heart out but I feel everyone should watch it.
Posted by IHG at 11:56 PM No comments:

Snowmen Love to Ride Too! 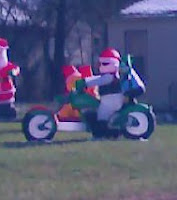 I was driving home today from my Sunday grocery run and found this awesome holiday decoration. It's a motorcycle riding Snowman! Too Cute!!!
Posted by IHG at 1:14 PM 2 comments:

Labels: Rascal Flatts, Take Me There

Saturday morning it was cold and crisp outside. Great weather for an early morning walk. I drove down and parked my car near the entrance to the trail in Johnston. The first amazing thing that I saw were two military choppers,chinooks is what I think they are called, coming in from the East. Camp Dodge is located in Johnston so there is always a lot of military activity going on all the time. I stood frozen watching the choppers approach, looking up at them as they flew directly over me. Not sure if they saw me but I raised my arm and waved. I knew that this was going to be a great morning walk. Wish I would have remembered I had my camera phone so I could have got a picture as they flew over.

I placed my earpieces in my ears and cranked my favorite walking tunes. I love listening to this pod cast called Podrunner. It's upbeat and sets me in motion for my power walk. The trail that I take has amazing sites that you wouldn't think you'd be seeing in the city. One house along the way has two goats that always make me laugh. There are a couple more homes that have horses which are beautiful creatures. Sometimes I stop and just watch them for a few minutes.

Months before I'd noticed that the city was lengthening the trail to go under Interstate 80. It was finally completed so I decided to see where the new trail went. It wrapped around and took me right to the Interstate. I stood for a long time and watched the cars, SUVs, and Semi trucks pass by. It's so much fun having new adventures along the way. I'm a little sad though because my trail walking will be coming to an end once the snow appears. The trail is closed during the winter months.

While I was walking back to my car I looked down and noticed how long my shadow looked. I've always wished I was taller and my shadow definitely was on Saturday. 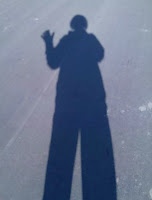 I sold two more t-shirts!!! Thank you so much to the 3rd ODB Shopper! Things are looking up for this girl.
Posted by IHG at 8:13 PM No comments: 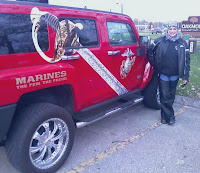 I am very honored to share my birthday with the United States Marine Corp!! Ooh Rah! Semper Fi!! I sometimes wonder if that is why I'm so damned patriotic. Could be...but I think it's more likely because my parent's brought me up that way.

Today is also Dan and my 7 year Anniversary. It's been a roller coaster ride but we still manage to hold on. Happy Anniversary, Dan!

The sun is coming up...it's kind of faint orange...I love this time of the day. It's so calm and peaceful. The geese will be flying over soon...heading back to Saylorville Lake for the day. Hearing and watching the hundreds of geese fly over my house is the most amazing thing...you can actually hear the movement of their wings in the air. It is a sight I look forward to witnessing daily.

I'm crossing my fingers that we get a little ride in today. It's supposed to be in the high 50's. That's a heat wave for November 10th!
Posted by IHG at 6:22 AM 2 comments: