Bike Night at the Water Street Bar and Grill in Cambridge, IA and a Future Biker

Saturday it had been nice all day long. I kept hearing the roar of motorcycles coming through the open windows in my house. With each roar came the pangs of wanting to ride...needing to ride. I wasn't counting on it though because Dan had been ill'n and I'm sure it's not fun to handle a heavy chrome horse when you don't feel well. 6 pm rolls around and I hear the garage door go up. The moment of truth is upon me...will it be yay or nay? In walks Dan...he looks at me and says..."Why are you not all biker chicked out and ready to go? The Glide is leaving in 15 minutes." Let me tell you I was outside and ready to go even before Dan was! So we get on the road and head toward Ankeny. I'm thinking in my head...why does he always go this way whenever we are just going for a "ride". Stop light, Stop light, Stop light, Stop light, Stop light, Stop light, Stop light, left turn...why are we turning onto Interstate 35 going North, my mind wonders...hmmmmmmmm...are we going to Ames?? We ride on down I-35...the chilly breeze felt good...I was loving the feeling...all caught up in the ride. Along comes the Maxwell exit and we take it. Hmmmmmmmm...are we going to Mitzi and Todd's? Nope...at the top of the off ramp there is a Miller Light Beer Banner that says Water Street Bar and Grill Bike Night - Cambridge. Dan points at the banner and gives me the thumbs up. We roll into this small town that I'd never been too before. There were probably about 15 bikes total when we arrived. Small but hey...it was their first one. Clutch from KGGO was there and the Water Street Bar had a band scheduled for later. We hung out and walked around and looked at the bikes. Watched people ride into town.


The first two photos are the American Legion Riders from Des Moines. 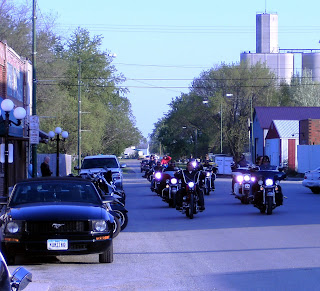 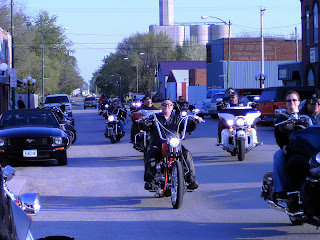 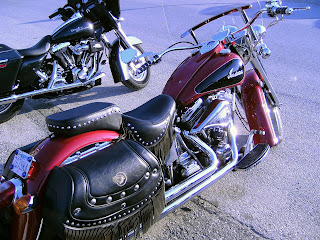 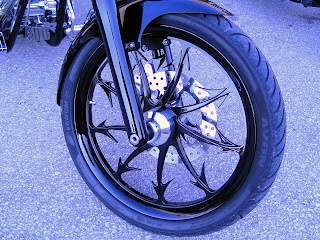 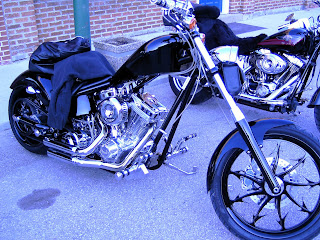 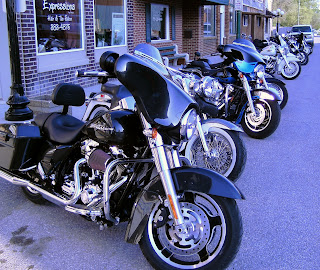 And my favorite photo of the night!! 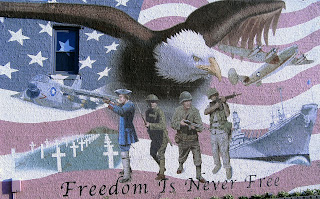 We saddled back up on the Glide and took off to ride. Saturday night was a great surprise! Sometimes I do love surprises when it includes a motorcycle and riding!

Future Biker??
Monday I get a call at work asking me to pick up my nephew Nolan because he's going home with Dan's folks. We get back to my house and as he runs into the garage he sees the motorcycle and asks if he can sit on it. Sure thing...hop on. 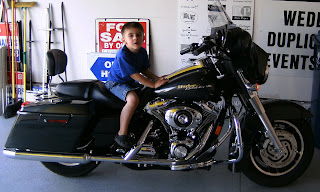 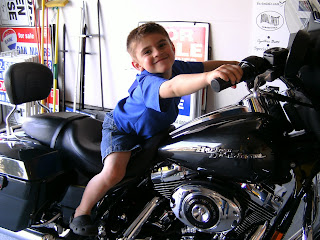 And of course he wants to start it up so Dan gets on and starts it up for him. 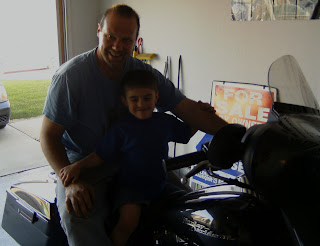 I think we have a future biker on our hands because he really wanted to go for a ride. Next time Nolie...Next time you come over you can have a ride! :)

i can SOOOO picture running in the house to get all biker chick'ed out, woohoo!!..lol!!! i love it!!! the pics seem like it must have been a great time. and Nolan, yes i'd say i recognize that happy face as a future biker :) very cool...

I am sooooo yearning for you to ride your own! I know you can cause ya got it in ya! What stories you could tell! Can't wait!

I LOVE getting all biker chick'd out!! LOL!!! I agree with KT Did...you so need to ride your own!

Re Nolan: Look at that little biker face wanting to start the bike up. He is SOOOO gonna ride when he gets older! Way cool!

Glad you got out for a nice ride and had some fun. Speaking of future bikers, my soon-to-be 5 year-old announced to me this morning that he was going to get a dirt bike when he grows up!

Er...ah...have you talked to your mother about that???

I'm with KT too...get your own ride son Yes a future Biker was born in your garage. That's how it always happens

Great post Steph... I love surprises too! I'm going to ditto everyone else's comments as far as getting your own. I can't wait to read your blog that day!! Woo Hoo!

Thanks for sharing the pics.

Joker... I know Iowa is full of it, but the corn does still grow in a field, not downtown. LOL!

I didn't remember this, but I did the same thing as a kid. We're born to be bikers, I truly believe it. I've been to Cambridge...took the bike a couple weeks ago--little winery outside Cambridge. Cool town, Cool winery.

I almost broke down and sobbed my peeps when you were talking about all the bikes outside romping free while you were stuck inside. That was just damned sad. You got the sickness bad sister.

You know what? When, not if, that day comes when you straddle your first...well, it's gonna be a day never to be forgotten. That will be a great post to read. You are gonna do it one way or another 'cause the restless heart never stops beating.

now look what you've done...you gave the sickness to the kid!

Ms. M - It was a nice little town. There needs to be more Saturday night bike nights in our area since we can't always go during the week. As for Nolan...he's going to be a little Rebel...I can just see it in his eyes.

KT Did - It will happen someday. Do you know of any money trees out there that I can go harvest about 16k from? lol Thanks for thinking of me though...I need all the positive motorcycle karma I can get! :)

Ann - You look good all biker chicked out! And you know...you can tell us real ones from the HD groupies! :)~ That is a really cool rim, huh? I was hoping that the dude riding the bike would come out so I could get a look see at that too! lol I'm bad...soooo bad!

D-Day - yep...Nolie will be the hellraiers for sure. But he's also the sweetest kid you've ever met. That night he said to me...Stephanie, I wish you lived closer so that all I had to do was walk over to see you. Awwwwwwwwww!

Joker...my friend...As LadyR stated in her comment...they don't plant the corn in the middle of downtown. Plus...DUH...right now is planting season so there isn't any corn showing in the fields yet! Geesh...you can tell you are from the East Coast! LMAO! he he

Your 5 yr old just wants to be like his Pops except maybe a little more on the EK side of it. Has he been watching extreme motorcross or something? lol

Pappy - Thanks for stopping by. Glad you liked the pictures! :)

LadyR - Thanks for the compliment! I really do try not to whine about not having my own but somedays it just really bugs the shit outta me! Thanks for setting Joker straight. We need to school the Easterner on farming! lol

Rick - Thanks for stopping by! We actually rode by that winery on the way home from Cambridge. Would you and Monique be interested in touring Iowa and seeking out Wineries? YUM!

FLHX Dave - Sorry Man...are you sure it wasn't just that damn roid getting you a little teared up? LOL It's tough for me to hear the roar of the motorcycles...they call my name...they mock me. When it finally happens though...LOOK OUT WORLD! Don't be shocked when after I'm a pro I'm riding into your town to find you and B.B.!

Steph I'm thinling of getting a soft tail soon...as soon as I can get the finances squared away...hopefully soon.